Posted on March 11, 2013 by IL Tactical Mod in Personal Security 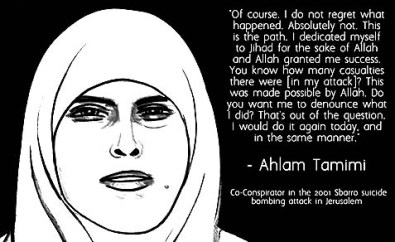 Murderer Ahlam Tamimi has no regrets.

News broke out last week that the US has captured Osama Bin-Laden’s son-in-law, Sulaiman Abu Ghaith. It appears that the former Al-Qaeda spokesman was picked up as he was traveling from Turkey to Amman.

But in Amman, capital city of Jordan, resides a woman who was far more active than Abu Ghaith in killing and maiming American citizens. Ahlam Tamimi, described as a university student and part-time journalist, planned the Sbarro massacre of August 2001 in Jerusalem, and personally led the guitar-case carrying bomber to the crowded destination.

President Obama is planning to visit Israel, the Palestinian Authority, and Amman, Jordan this month. He could do a great service in the fight against terrorism by publicly committing his administration to the active prosecution of Palestinians who willfully murdered and wounded American citizens. U.S. terror victims are not asking for favors; we are asking our government to bring justice to those who have been devastated by wanton Palestinian terror funded by U.S. tax dollars.

Fifteen people were murdered in the Sbarro massive explosion, including two American citizens, and another four Americans were wounded. Tamimi was arrested, tried, and sentenced to sixteen life sentences in Israeli jail. But in October, 2011, she went free as part of the deal Israel made to release captive soldier Gilad Shalit. Today, Tamimi sits in Amman where she has her own talk show. As to her role in the bombing, one can hear it in her own words:

The story of Tamimi is the story of failed U.S. law enforcement as it should apply to Palestinian terrorists. After the murder of Leon Klinghoffer on the Achille Lauro, in 1985, the U.S. passed a set of laws to make a terror act against a U.S. citizen anywhere in the world an offense prosecutable in U.S. federal court. A summary of the laws may be found here. These laws form the basis for the extradition of terrorists and pirates, but, to date, the U.S. has never applied these laws to a Palestinian terrorist involved in the death or injury of an American citizen.

This state of affairs is not due to a lack of information: from the 1993 signing of the Oslo Accords to 2006, the tail end of the “Second Intifada,” Palestinian terrorists have murdered 54 American citizens and wounded another 84—including this author and his son—a total of 72 separate terror attacks. The FBI dutifully opened files on every attack and a new office was opened in the Department of Justice to “monitor” such cases: the Office of Justice for Victims of Overseas Terrorism (OJVOT).

If anything should be abolished during the present “sequester,” it is this office: the number of Palestinian terrorists tried since this OJVOT came into existence in 2005 is equal to the number prior to that date: Zero.

When Israel was set to release hundreds of convicted terrorists in the aforementioned Shalit deal, I frantically contacted officials in the US government: the two women who brought “our” bomber to downtown Jerusalem were on the launch pad for release. The U.S. belatedly passed along to the Israeli government that no terrorist with American blood on his or her hands should be released. This note was given the day before the prisoner exchange. Needless to say, Israel ignored the request and not a word was said in Washington about the matter.

The reason is simple: Washington never expected Israel to comply, because our cases are irrelevant to the FBI and the DoJ. When the terrorists were released in exchange for the Israeli soldier, the FBI could not even figure out who got out: they could not translate the names because identity numbers were missing digits. Finally, an American lawyer who has worked harder than all of the various governmental agencies combined for U.S. terror victims, informed the FBI that 15 terrorists directly involved in the murder and maiming of American civilians walked free.

The lack of prosecution of Palestinian terrorists has been a bipartisan failure spanning five attorney generals. A year ago, fifty-two members of Congress asked Attorney General Holder how come no Palestinian terrorists had been prosecuted in over seventy attacks on American citizens. The Attorney General answered that they are trying. Yet, the stories of Osama’s son-in-law and the Somali pirate and others who have been whisked into New York court in handcuffs show that the U.S. can extradite and prosecute terrorists when the government feels that the situation merits such efforts.

In our cases, we have been outright abandoned by our government, even to the point where the State Department planned in 2008 to file a brief in Federal court in favor of the PLO and against an American woman whose husband was gunned down by a PLO terrorist.

And just over a month ago, the Palestinian Authority inadvertently provided terror victims in a Federal civil suit a detailed account of the terrorists behind an attack that left two American girls dead. The FBI and DoJ were alerted to the existence of this document; neither showed any interest in receiving a copy of the same; the State Department thought it irrelevant to ask the Palestinians to provide the document produced by one of their own senior intelligence officers.

By: Alan Joseph Bauer, from: http://www.jewishpress.com/indepth/opinions/holder-wont-prosecute-palestinian-killers-of-54-u-s-civilians/2013/03/10/0/?print